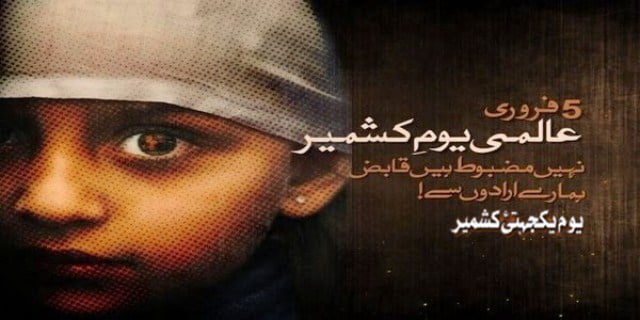 Kashmir Day which is celebrated on each 5th February

every year to show the solidarity not only in Azad Jammu & Kashmir but also in Pakistan and all over the world. Kashmir conflict has been a bone of contention between Pakistan and India since 1947. This day was proposed by Qazi Hussain Ahmad of Jamaat-e-lslam party.

This day has been observed since 1990 on the call of Nawaz Sharif who was the opposition leader and chief minister of Pakistan at that time. Then the leader of Pakistan people’s party government responded by declaring this day a public holiday and named it as Kasmir Solidarity day. Kashmir issue is the jugular vein of Pakistan and an oldest unresolved international issue.

The day is observed as a commitment by people of Pakistan to extend their moral, political and diplomatic support to their Kashmiri brethren for their just right to self-determination as envisaged in the UN resolutions. The day is also observed to commemorate the brutal killing incident of 55 innocent Kashmiri civilians in Srinagar. In 1990, after Indian authorities forced the Kashmiri puppet Chief Minister Farooq Abdullah to resign and enforced “Governor Rule” in 10K,

Mr. Jagmohan Malhotra was appointed as new Governor of the state on 19 January 1990. Mr. Jagmohan, unleashed a new reign of terror. On night of January 20, Indian troops molested several women in Srinagar during house searches and raids. As the word about the molestation of the women spread in the morning, thousands of people took to the streets in the city to protest against the brutal crime of the troops.

The occupation forces under the directions of new governor, resorted to indiscriminate firing on the protesters in Gaw Kadal area of the city, killing over 50 people and injuring hundreds of others. The January 21 mass killing of the people, is one of the worst massacres of the Kashmir history.