Allama Iqbal Open University is the biggest distance learning University in ASIA. All degrees which are issued by AIOU are recognized by HEC. This university offers Matric to Master level programs for the very cheapest fee. This university has 1400 study centers and 44 campuses from all over Pakistan. AIOU also offers video conference lectures to students. AIOU Islamabad has offered Matric admission 2023 Spring semester. The prospectus is available for admission in Islamabad’s main campus and a regional campus of AIOU. AIOU Islamabad is offering the following subjects and classes admission in 2023. All the desiring students are directed to only apply online for Allama Iqbal Open University Matric Admission 2023. 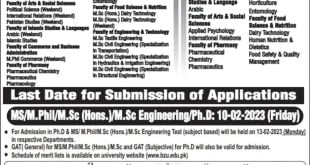