GAZA CITY: Two Palestinians died in an Israeli attack on a refuge camp in central Gaza on Monday, pushing the death toll in six days of violence to 103, emergency services said.

The latest raids came on the heels of an attack on Gaza City’s Shuruq tower media centre — the second time the building has been targeted — which killed one person.

Islamic Jihad sources named him as Ramez Harb and said he was a senior commander in its armed wing, the Al-Quds Brigades.

Elsewhere, four more people died in a bombing of the Nusseirat refugee camp in central Gaza, medics said, and another Palestinian was killed east of Nusseirat in a separate strike.

There was no immediate word on the identities of the other victims. 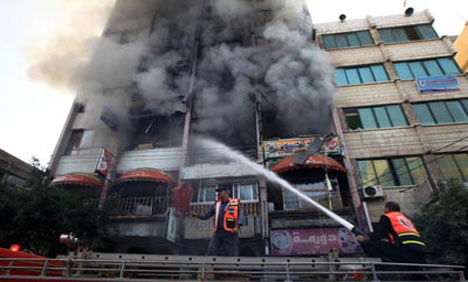 Also during the afternoon, one person was killed and another two wounded when a missile struck a car just north of Gaza City, medics said, without identifying those killed.

Another three people succumbed to injuries sustained in the violence, but the health ministry could not immediately provide details on their identities.

Elsewhere, a missile hit a motorcycle east of Khan Yunis in southern Gaza, killing two men and critically wounding a child who was with them, Gaza’s ambulance service said.

In a strike on southern Gaza City, a car was hit, killing one man and injuring another three, officials said, naming the dead man as Mohammed Shamalah, 23.

Three people were killed in a strike on a car in Deir al-Balah in central Gaza, all of them from the same family — Amir Bashir, Tamal Bashir and Salah Bashir.

Medics said another man had been found dead in the northern town of Beit Lahiya, naming him as Abdel Rahman al-Atar, a 50-year-old farmer.

Another 10 people were wounded in the town, ambulance service workers said, bringing the total number of injured in Gaza since Wednesday to 870.