RAWALPINDI: In order to boost the agriculture sector in the province and increase agricultural yields, a computerised lucky draw was held for the award of 392 subsidized tractors under the ‘Green Tractor Scheme’ to farmers of the district.

Under the scheme, Rawalpindi district got 231 tractors, Gojar Khan 55, Taxilla 45, Murree 18, Kahota 17, Kalar Syedan 18 and eight tractors were given to farmers of Kotli Sittian.

The district government had received around 2,049 applications from the farmers of Kahuta, Kotli Sattian, Murree, Taxila, Kallar Syedan and Gujjar Khan.

The provincial government had allocated more than four billion rupees for the scheme under which Rs200,000 would be given as a subsidy on each tractor, while the remaining cost would be paid by the selected farmers.

EDO (Agriculture) Dr. Ghulam Ahmed Gill addressing the ceremony said that the scheme would boost agriculture and farming sector in the region. 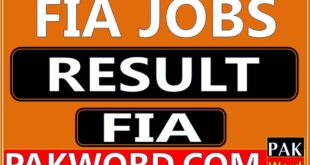 As the FIA Physical Tests are completed in Pakistan, the candidates now will appear in …